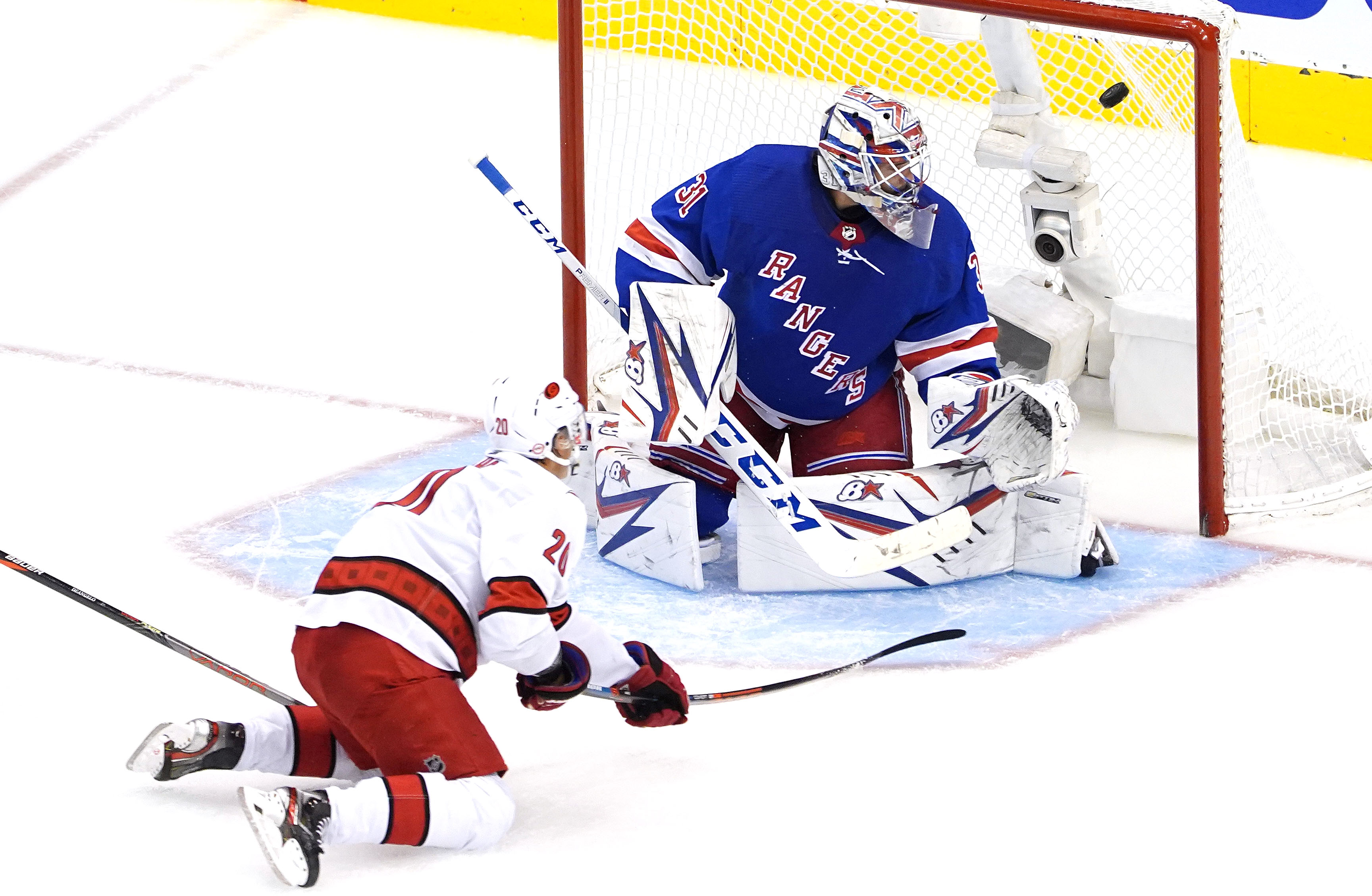 Not even Igor Shesterkin could save the Rangers season.

Finally cleared to make his postseason debut in time for Tuesday’s Game 3, the rookie goalie was strong in net, but it still wasn’t enough as the Rangers fell to the Hurricanes, 4-1, and got swept out of the Stanley Cup qualifiers at Scotiabank Arena.

Former Ranger Brady Skjei set the Hurricanes’ winning goal in motion, firing a shot from the point that Warren Foegele deflected past Shesterkin to take a 2-1 lead at 5:07 of the third period.

Sebastian Aho added a highlight-reel insurance strike midway through the period, stealing the puck from Jacob Trouba and dangling around Tony DeAngelo to get off a backhander, before adding an empty-netter in the final minute.

And so a season that featured encouraging second-half strides from a young team to put the Rangers in a position to even get to Toronto ended in stinging fashion. They struggled to unlock their offense, scoring just four goals in three games against a more experienced Hurricanes group that reached the Eastern Conference Finals last year.

Shesterkin (27 saves) had watched the first two games from the stands, deemed unfit to play, as Henrik Lundqvist stepped between the pipes and allowed seven goals on 71 shots. But Shesterkin was finally cleared in time to play Tuesday, ending Lundqvist’s streak of 129 straight postseason starts.

The rookie looked at ease in his postseason debut, much the way he had when he gave the Rangers a spark upon his arrival in the regular season — posting a 10-2 record, 2.52 goals-against average and .932 save percentage. His sterling efforts at the beginning of the third period Tuesday kept it a 1-1 game before the Hurricanes finally broke through to secure the sweep.

The Hurricanes, meanwhile, started James Reimer in the second half of the back-to-back after Petr Mrazek had started the first two games (47 saves on 50 shots). Reimer faced much more traffic than Mrazek had and rose to the occasion with 37 saves, including a handful of huge ones to keep the game tied heading into the third period.

The Rangers came out buzzing in the first period and for the first time in the series didn’t allow a goal in the first five minutes of the game. Shesterkin stopped all six shots he faced in the opening period while the Rangers threw 14 shots on net, although they had to settle for a scoreless tie through 20 minutes.

That didn’t last long, though, as Chris Kreider gave the Rangers their first lead of the series just 12 seconds into the second period. The winger, who had been mostly quiet through the first two games, delivered in a big way. He used his speed to fly into the offensive zone and split two defenders, holding off one of them as he skated to his left and then flicked the puck past Reimer for the 1-0 lead.

But the Hurricanes had a quick answer, taking advantage of a long Rangers shift in which Marc Staal was without a stick after it snapped in half. After the Hurricanes attacked his side, Teuvo Teravainen scooped up a pass in front of the net and backhanded it over Shesterkin’s shoulder to tie it 1-1 at 3:18.

The Rangers had a flurry of golden chances to take the lead late in the second period but Reimer somehow stopped each one. Brendan Lemieux had a trio of close shots muffled and seconds later, Filip Chytil was denied by Reimer’s outstretched stick.

Coach David Quinn had been confident before the game that the Rangers had much more in the tank that they had yet to show. But not even Shesterkin could provide the winning magic that he had in the regular season, forcing the Rangers to be the first team to leave the bubble in Toronto.

Giants have their own issues to worry about versus ailing 49ers

Kaavan, ‘world’s loneliest elephant,’ was cheered up by listening to Frank Sinatra