By Natasha Hooper For Mailonline

They butted heads over their mutual interest in dating Tommy Fury during the 2019 series of Love Island.

But it is all water under the bridge for Molly-Mae Hague and Maura Higgins as they are now close pals and have taken a much-needed getaway on the sun-drenched island of Crete.

The blonde beauty, 21, gave a hilarious impression of her Love Island pal, 29, in a profanity-laden speech to the camera on Thursday as they make memories on their girls’ holiday. 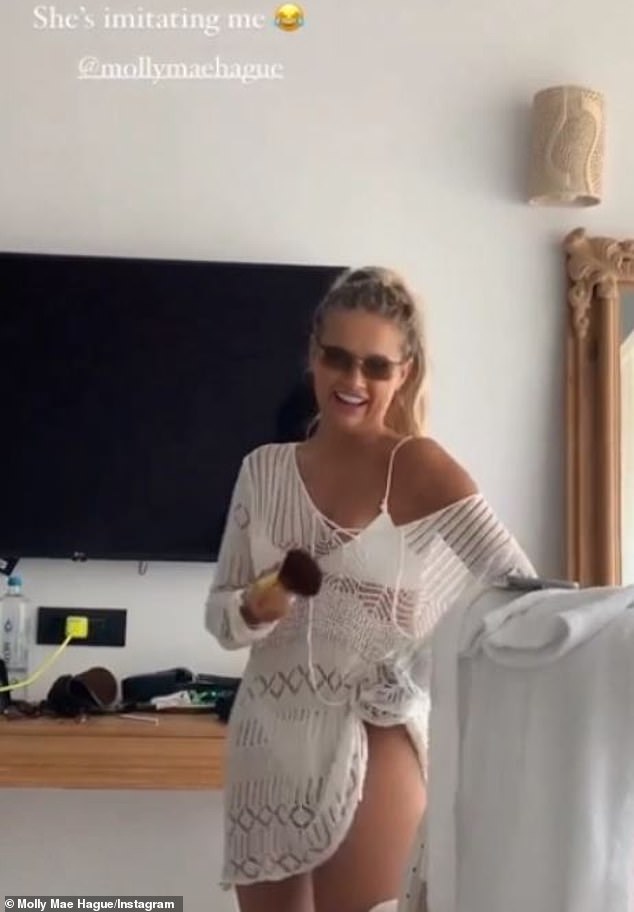 Impersonator: Molly-Mae Hague delivered the perfection impression of her Love Island pal Maura Higgins on Thursday as the pair enjoy a luxury girls’ holiday on the island of Crete

The Love Islanders were originally rivals after they competed for the affections of Tommy, 21, on the hit reality show.

Bombshell Maura appeared to turn Tommy’s head following her arrival, however his heart ultimately lay with Molly-Mae and the three of them are all now good pals.

The reality TV stars enjoyed a sunshine getaway together along with Molly’s sister, Zoe, this week. 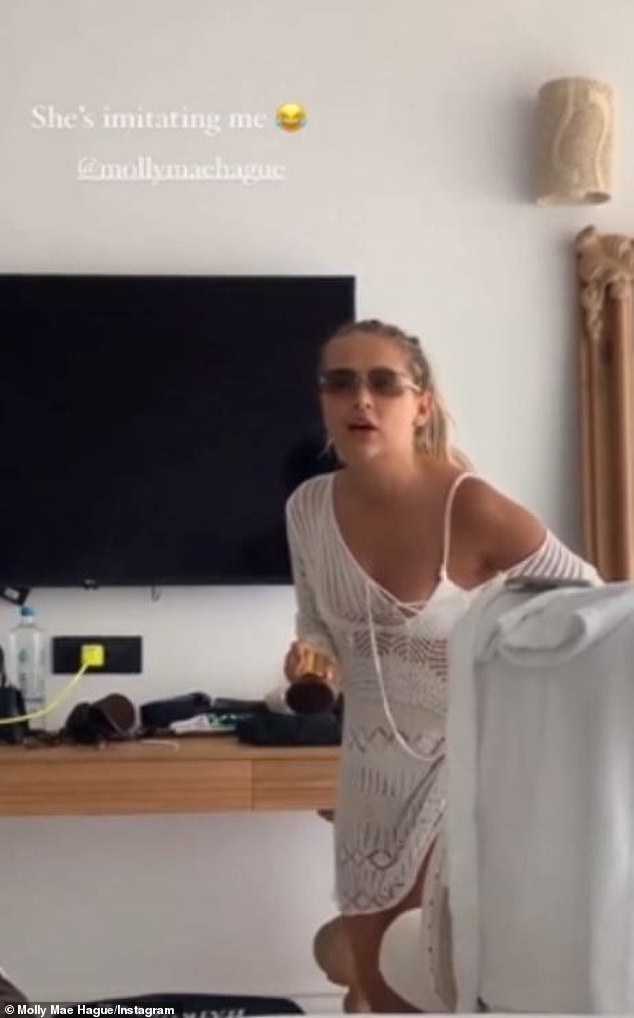 Hilarious: The blonde bombshell, 21, delivered the hilarious expletive-laden impression of her Irish friend, 29, while wearing a white bikini and crotchet dress that draped over her shoulder

The Irish beauty, recorded her friend executing the perfect Irish accent as she imitated her from their five star hotel room.

Maura can be heard chuckling in the background as Molly keeps her entertained with her antics.

As she delivered the perfect Maura rendition, the Love Island star was seen wearing a cream crotchet dress with a complimentary white bikini and ’90s inspired shades. 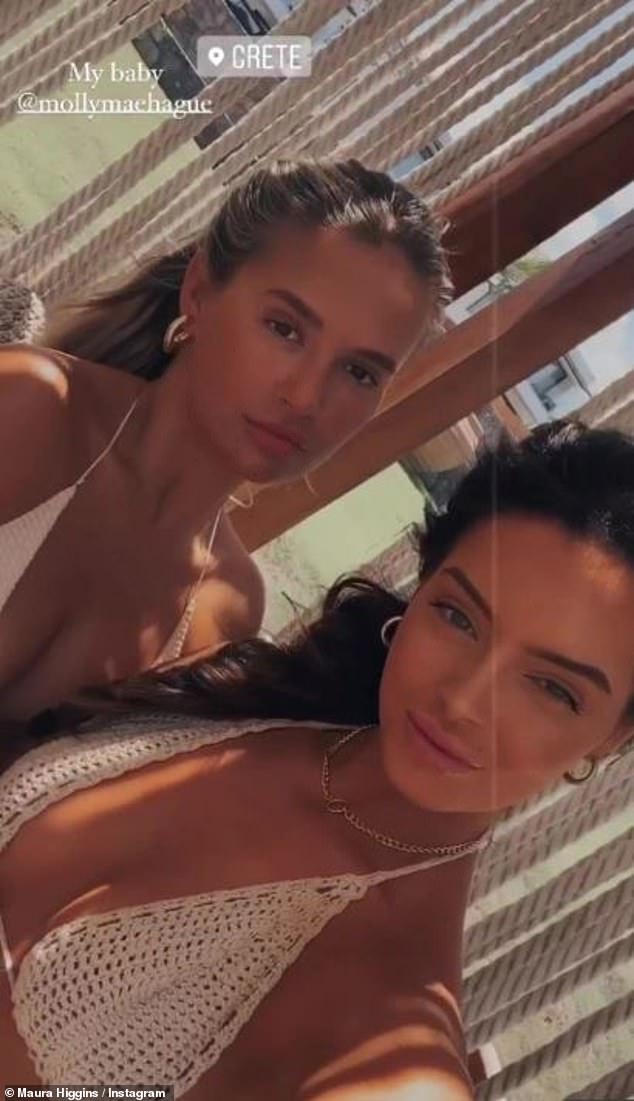 Dream team: The Love Island stars originally clashed on the show after they competed for the attention of Tommy Fury, but the boxer ultimately chose Molly and all three are now great pals

Molly was joined on the trip by Maura, hairdresser Jay, and her sister Zoe who she treated to the whole luxury experience.

Their lavish room features a private pool outside, a freestanding bath, plush white bed linen and a mezzanine.

The Love Island stars have both been keeping fans up to date with their holiday activities and frequently post videos of them eating out or soaking up the sun on the beach together. 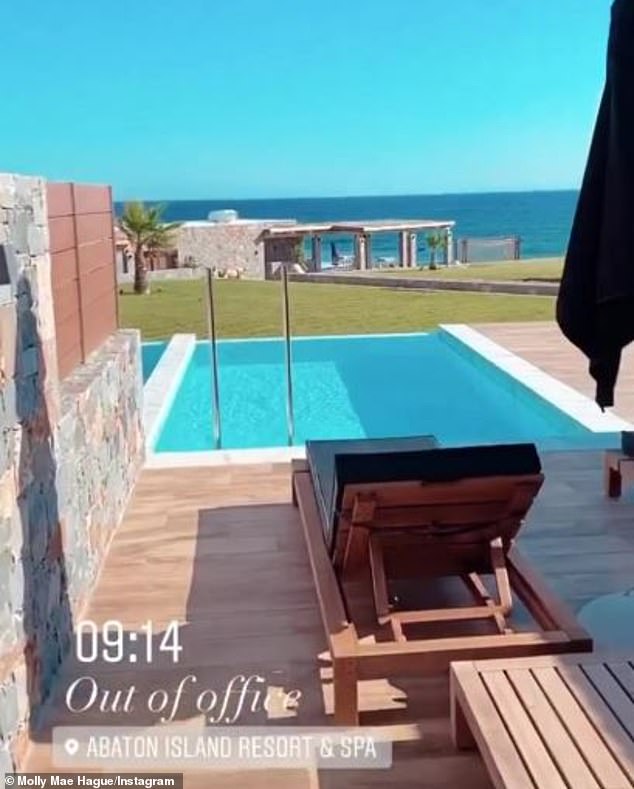 Out of the office: Molly updated fans with snaps of their luxury holiday which includes a private pool and a freestanding bath in their hotel room with views looking onto the ocean

Molly-Mae almost missed her holiday with Maura, after new coronavirus regulations meant that she failed to fill in a form on time.

On Monday, the influencer took to Instagram to detail her Gatwick Airport experience, in which she had failed to correctly fill in the required Passenger Locator Form (PLF) in the right time frame, yet was thankfully saved by her sister’s form.

While the reality personality conceded that the entire incident was her ‘own fault’, she did however warn fans that the coronavirus restrictions are ‘SO STRICT’ and urged followers to fill in their forms on time. 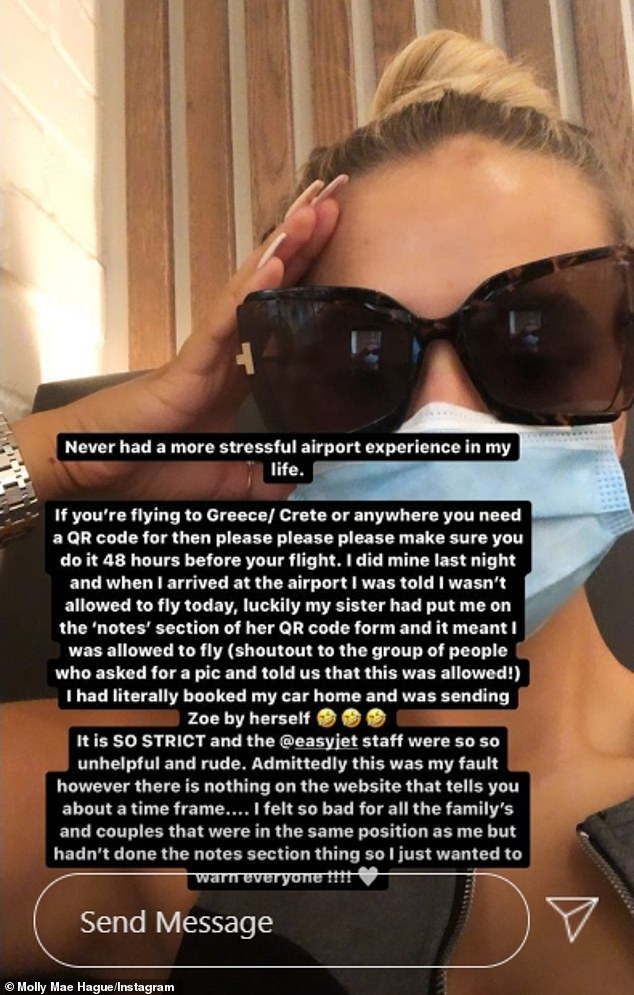 On edge: The reality star originally thought she was going to miss her holiday with her sister and Maura after failing to correctly complete her Easy Jet form within the correct time frame