By Bryony Jewell For Mailonline

And Lottie Tomlinson looked sensational as she got back to her modelling work by walking a catwalk in London on Wednesday.

The social media influencer, 22, posed up a storm as she flashed her taut midriff in a bright pink sports bra and leggings.

Work it: Lottie Tomlinson, 22, looked sensational as she flashed her taut midriff during a fashion shoot in London on Wednesday

Lottie exuded confidence as she showed off her toned figure in the skin-tight sports wear, which featured a light pink detail around the high-waisted leggings.

She completed her look with a pair of bright white trainers and a selection of stylish gold jewellery including a chunky chain necklace.

The blonde, who is the sister of One Direction star Louis, wore her long locks parted in the middle and plaited, before let them flow out into curly ponytails.

Love Island star Joanna Chimonides was also seen on the catwalk, with the beauty sporting a black gym set and the same fresh shoes. 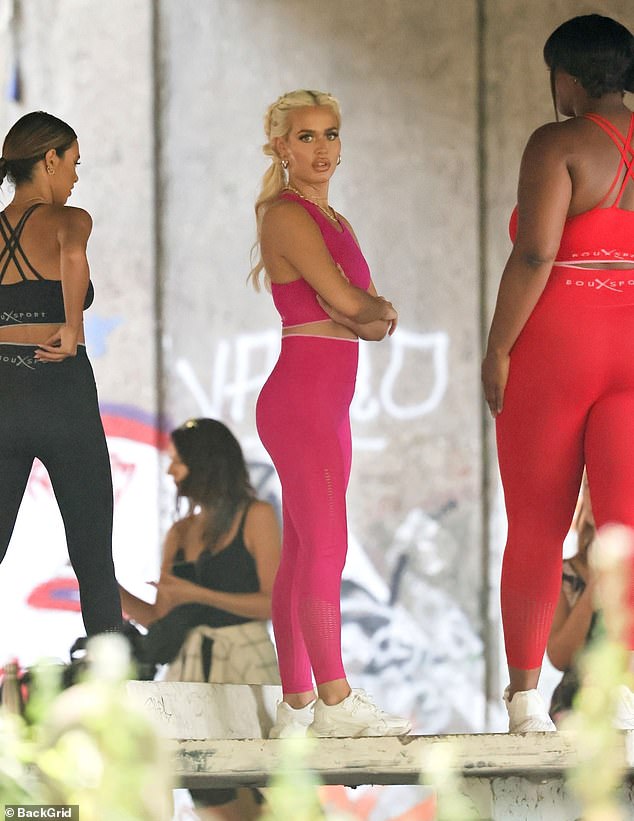 Beauty: The social media influencer and sister of One Direction singer Louis made sure to work all her angles as she posed up a storm on the catwalk

It comes after Lottie was said to be ‘growing close’ to Lewis Burton, who previously dated the late former Love Island host Caroline Flack,

The pair are said to have bonded over the grief of losing their respective loved ones – with Lottie losing her mother and sister in recent years and Lewis losing Caroline in February.

Lottie’s sister Félicité, 18, died after an accidental drug overdose, three years after the death of her mother Johannah, who died of cancer.

It’s understood Lottie became better acquainted with Lewis at a house party in May hosted by Caroline’s close friend Lou Teasdale, 36, which was held to mark three months since her tragic passing. 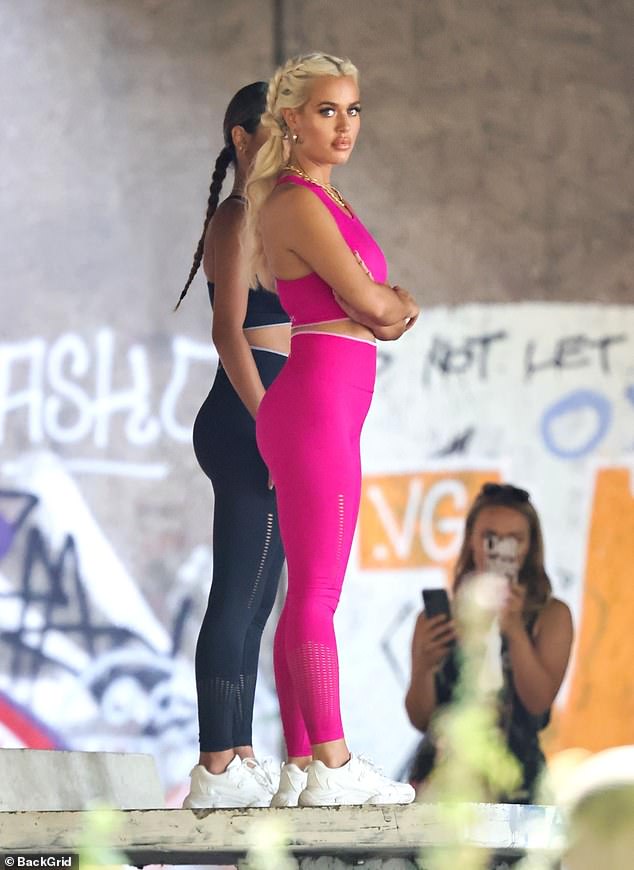 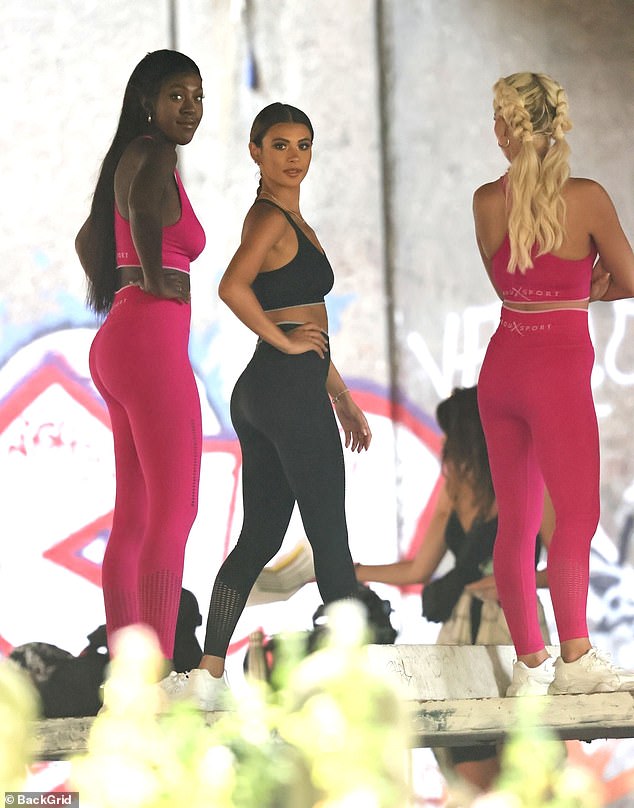 Stunning: Love Island star Joanna Chimonides was also seen on the catwalk, with the beauty sporting a black gym set and the same fresh shoes

A source exclusively told MailOnline: ‘Lewis and Lottie have grown close after spending time together at a party at Lou’s house. They have been meeting up in secret for weeks but their newfound friendship hasn’t gone unnoticed by mutual pals.

‘Not all of Caroline’s friends are happy with how the situation appears to be developing but can understand that both Lottie and Lewis have been there for each other as a shoulder to cry on.

‘Lewis spent last week in Marbella while Lottie was in St Tropez the weekend previous, they couldn’t wait to be reunited with each other on Friday.’ 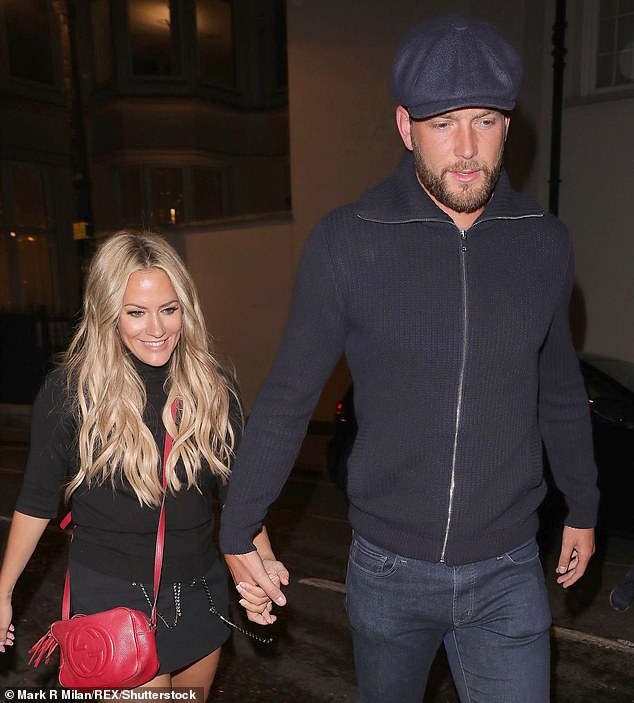 Tragic: Caroline Flack was found dead on February 15, the day after she had learned the CPS was charging her with allegedly assaulting model boyfriend Lewis  (pictured in October 2019)

A representative for Lottie Tomlinson declined to comment at the time.

Lottie – who was known to be friends with Caroline through their links with The X Factor – recently posted a slew of sun-kissed swimwear snaps from her holiday to Mykonos, which Lewis liked on Instagram.

This fuelled rumours they had ‘grown close’, after photos exclusively obtained by MailOnline showed Lewis arriving at his flat with Lottie at the end of July. 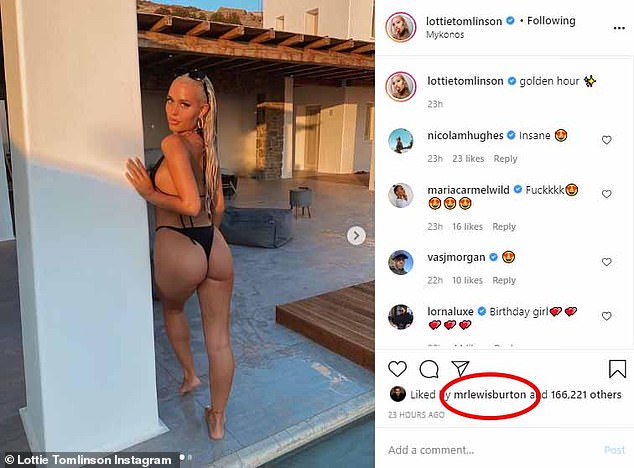 Liked: Lewis gave a slew of Lottie’s bikini-clad Instagram photos his approval after it emerged the pair had ‘grown close’ over the past two months 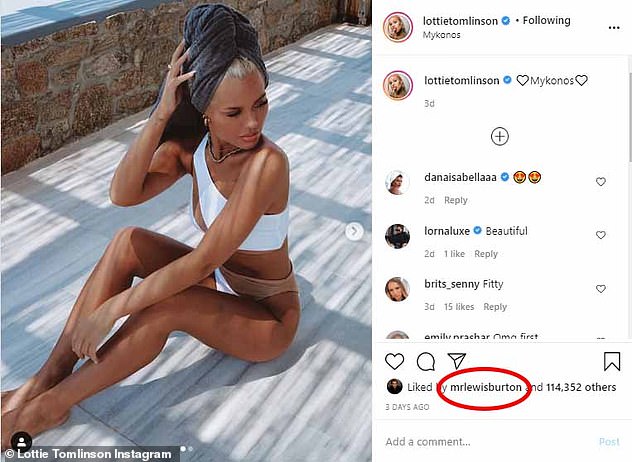 Stunning: The pair are said to have grown close in recent weeks and Lewis has showed his support to Lottie by hitting the like button on some of her Instagram snaps

While last Friday the pair were seen taking a sunny stroll and sipping on juices, just two days after the inquest into Caroline’s death.

Caroline died by suicide, aged 40, at her London home, days before she was due to face trial for assaulting Lewis, who she had been in a relationship with for just over six months.

The TV presenter was arrested in December for assault and charged with attacking the model at her home in Islington.

Lewis dropped his assault complaint against Caroline but prosecutors pursued it and the couple was told not to have any contact.

The Block's Darren Palmer is 'blown away' by bathroom reveal