Home Money It will take 100 years for women to earn the same as...

It could take a century for women to be paid as much as men, if things stay as they are now.

The wage gap between men and women is 20%, meaning women get paid 80 cents for every $1 men earn. In the last ten years, the pay gap only narrowed about 2%, and if performance stays consist with the past decade’s, it would take 100 years to reach equal pay, according to Goldman Sachs. 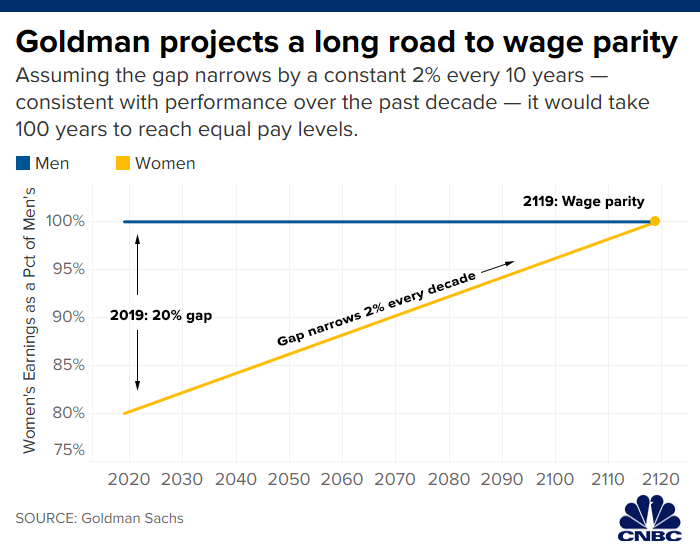 Goldman used data from the Bureau of Labor Statistics from 2015 to 2019 to figure the gender wage gap among prime-age U.S. workers remains 20% today. That figure is unchanged from last year’s work, which used data from 2013 to 2017. The situation is not improving. It was only June, when the last company in the S&P 500 with an all-male board added its first female member.

The only aspect that has changed since last year was the number of “unexplained” percentage points in the gap, which has risen to 18.1% from 17.5%. Educational background, work experiences and nature of the jobs can explain less than 2% of why this gap exists. That leaves more than 18% of the gap likely explained by gender.

What could close the gap?

The firm said at least part of the unexplained gap could be due to the lack of women in highly-paid senior roles. While women make up 40% of all employees of the U.S.-based S&P 1500 companies, women are only 5% of CEOs and 21% of directors, said Goldman. If more women held decision making roles, it could bolster the entire female workforce.

“Because men continue to be over-represented in corporate leadership positions and on corporate boards, as the data show, they hold the bulk of the decision-making authority today,” said Hindlian. Goldman also noted that women on average are more educated than men.

Banning employers from asking job candidates about their salary history could also help close the pay gap, Goldman’s analysis shows, a policy some states are starting to implement.

Mandating companies to pay and promote women fairly is another way to close the pay gap. California senator and Presidential hopeful Kamala Harris released an ambitious plan in May that outlines how she, if elected president, would hold corporations responsible for the inequality that exists today.

Although no statistical progress was made in the last year, its important to emphasize Goldman’s projection is based on idea that everything, government and company policies and societal norms, will also stagnate for decades to come, which is possible without a bigger commitment.

“The gender gaps are unlikely to close without broad commitment and active participation by men and women alike,” said Hindlian. “To be effective, the “tone from the top” needs to be accompanied by both action and accountability.”

—with reporting from CNBC’s Michael Bloom.

In the stock market, it's become Apple, Microsoft and Alphabet vs everyone else

Stocks appear detached from reality, rallying in anticipation of two things that may not happen

Here's what happened to the stock market on Friday

Man charged in Kansas with killing ex, 2 of her children