The Amed Post
Home World Germany suffers worst daily spike in coronavirus cases since May with 1,226...

In Germany, schools are run by the 16 states which are re-opening classrooms on different timescales and with different rules.

In Schleswig-Holstein, where schools returned on Monday, pupils aged 11 and over are encouraged to wear masks in class, although it is not compulsory.

By contrast, in Berlin – which also went back this week –  masks are compulsory in corridors and other communal rooms but not in playgrounds or during lessons.

The eastern state of Mecklenburg-West Pomerania became the first to reopen full-time after the break last week, but two schools have already had to close.

Some 800 students were forced to head home from the Goethe Gymnasium in Ludwigslust after a teacher tested positive for Covid-19.

Separately, 100 pupils from a primary school in Rostock have been placed under quarantine for two weeks after a pupil was confirmed infected.

Germany’s most populous state of North Rhine-Westphalia went back today, with provisions for entire schools to be tested if an outbreak is detected.

In Bavaria, which has the highest death toll in Germany, schools are not going back until September 8.

State education ministers had agreed in July that schools will be back full-time operation in autumn, after offering only partial hours as the lockdown was eased.

But critics have questioned whether this will be realistic because infection rates are rising again across Germany. 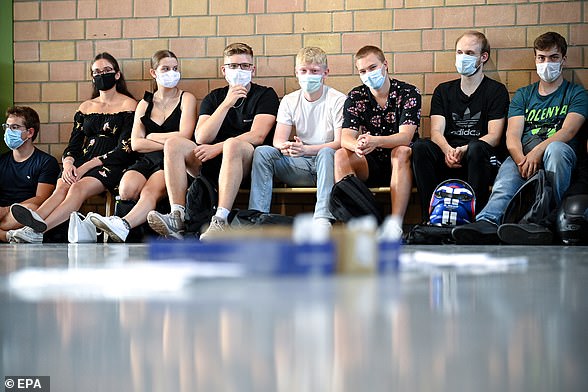 French schools are due to return on September 1 across the country, with no regional differences except for holiday dates later in the year.

Pupils older than 11 will be required to wear a mask in spaces where a one-metre distance cannot be guaranteed, including in classrooms.

Some masks will be handed out, but parents are generally expected to provide face coverings for their children.

Parents are also given the task of ensuring that their children do not attend school if they have a high temperature.

Younger pupils are generally not expected to wear masks, but they will be made available for any children who develop symptoms and are waiting to be picked up.

Teachers and pupils must wash their hands when they arrive at school, before they eat lunch and before they go home.

However, social distancing may be set aside in classrooms, libraries and canteens if it is ‘not physically possible’ or if some pupils would be excluded as a result.

In addition, restrictions have been lifted on different classes and year groups mixing with each other.

‘Our decision is clear, schools will start on September 14’, Orban said during a speech in parliament.

However, local authorities could decide to keep some schools shut if there were more then three new infections per 1,000 inhabitants in a particular area.

In that scenario students would then have to attend lessons online from home – but Orban has admitted that hundreds of thousands of Romanian children do not have access to a computer.

The government has promised to buy 250,000 tablets for students who can’t afford one and need it for online lessons, but this may not be enough to meet demand.

The PM said students, teachers and other school staff will have to wear masks and that disinfectants should be available at all times.

Romania closed schools, kindergartens and universities in March and decided to keep them shut for the rest of the academic year.

Dutch schools are due to start returning later this month, with some regions starting as soon as next Monday and others on August 23 or August 30.

Schools were only fully closed for a few weeks in the Netherlands, which started re-opening primary schools as early as May 11.

Secondary schools opened in part in June and are expected to resume their full teaching programme later this month.

The Dutch public health institute says that ‘children play a minor role in the spread of the novel coronavirus’, meaning restrictions are less strict than for adults.

The very youngest children in nurseries and kindergartens can even show up with a runny nose, as long as they are not showing signs of fever.

Primary school children up to 12 years of age do not have to keep the usual 1.5m apart from each other and from adults, including in kindergartens.

Secondary school pupils do not have to keep apart from each other, but teachers are expected to observe the safety distance.

Denmark was the first country to re-open schools, sending the youngest children back to daycare centres as early as April 15.

Health authorities said there were no signs of a rebound in cases as a result – and many schools are opening again for the autumn term this month.

Education officials say pupils will be returning to a ‘more normal everyday life’, with the one-metre safety distance not necessary in the classroom.

However, the one-metre distance will still apply when children are mingling with people in other classes.

If a pupil tests positive, staff are expected to notify all the parents and children connected with the school by email or on their website.

Schools may shut down if this happens although they will have to justify their actions to the Danish Agency for Education and on their website.

Schools are re-opening this month in Switzerland, with Basel returning earlier this week and Zurich on August 17.

Authorities in Basel said 26,000 children had returned to school on Monday, with pupils and teachers expected to keep their distance from each other.

Officials say hundreds of classrooms have been reconfigured over the holidays with unnecessary furniture removed to make more space for children to sit.

In Zurich, there is no mandatory safety distance for pupils in the three youngest year groups, while older children are expected to keep 1.5m apart.

Pupils are required to wear masks when they pass through the school buildings, but not during lessons or in the playground.

However, masks will be handed out by schools in Zurich so that pupils can wear them on public transport when they travel to school.

Some regions of Switzerland have imposed mask-wearing rules, including in Zurich where pupils are expected to cover their faces outside the classroom.

School trips are also allowed as long as staff draw up specific hygiene plans that conform with government requirements.

Schools in Austria – which has been praised for keeping its death toll relatively low during the pandemic – will return in early September.

Vienna has abolished the compulsory face-mask rule which was in place when pupils first went back before the summer holidays.

However, pupils will still have to wear masks when they travel to school on public transport under Austrian government rules.

Sports lessons have been allowed since early June, with individual schools left to decide on appropriate health measures.

Singing and after-school activities are also allowed – with up to 250 children allowed to gather indoors and 500 outdoors.

However, most children are expected to observe a one-metre safety distance, including with floor markings and one-way systems if necessary.

Austrian authorities have drawn up diagrams of how classrooms should be laid out so that children can sit one metre apart during lessons.

Italian schools have been shut nationwide since March 5 after Italy became the first European country to suffer a major coronavirus outbreak.

However, the country’s education minister announced in May that all schools would re-open in September, with distance learning continuing only for ’emergency reasons’.

In the hardest-hit region of Lombardy, kindergartens will re-open on September 7 and older children will return to classrooms on September 14.

The government has not yet decided whether pupils will be required to wear masks, although children aged six and under will not.

Officials say it is impractical to test everyone’s temperature when they arrive at school, but children with a fever are required to stay away.

Lunch hours will be staggered so that children can still eat together, although they may have to do this in their classroom if the canteen is not properly equipped.

At Trial, Jewish Victims of 2015 Paris Attack Ask: Why the Hatred?

Mine Disaster in China Kills at Least 16

Fighting Flares Between Azerbaijan and Armenia

Did The Police Maneuver, "Segmenting," Lead to Daniel Prude's Death?

What to Know About the Wildfires