Tocilizumab doesn’t keep Covid-19 patients alive, researchers have claimed in a blow to the goal of discovering more treatments.

Hopes were rising that the drug, originally designed for rheumatoid arthritis, would save lives by halting the immune system ‘storm’ that has killed thousands of infected patients.

But doctors in New Jersey have now said there is no evidence to support the use of tocilizumab in dealing with the life-threatening complication.

Results from their study, which involved 132 patients, revealed tocilizumab did not boost survival rates at all.

Scientists have now warned doctors should only give patients the drug — marketed as Actemra — in trials until evidence proves it works.

Biotechnology company Genetech, which ran the phase three trial — one of the final steps before a drug can be approved, described the findings as ‘disappointing’ amid the race against time to find more cures for the disease.

Only one drug has so far been proven to treat Covid-19. Dexamethasone, a £5 steroid, was found to cut the number of critically ill patients dying by a third. 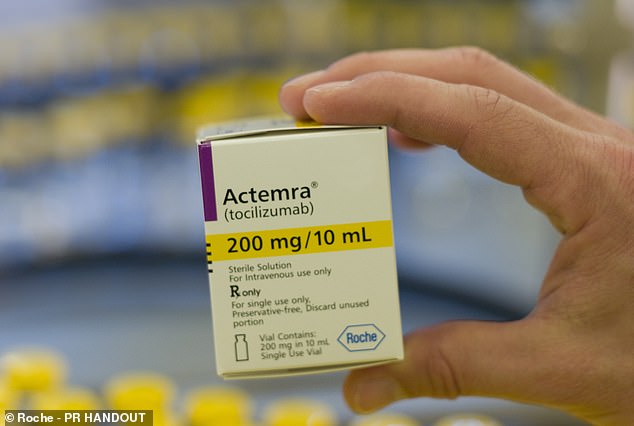 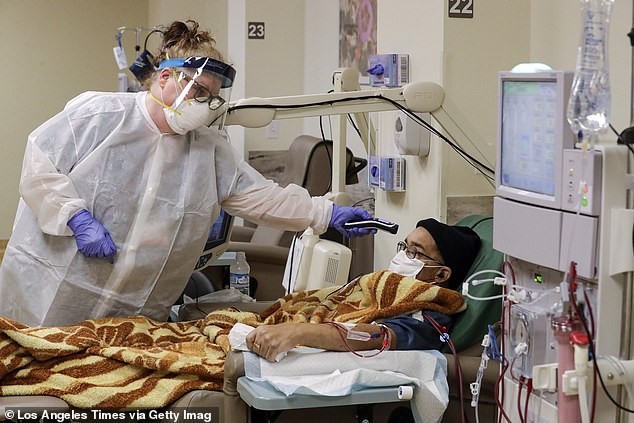 Doctors in New Jersey have said there is no evidence to support the use of tocilizumab to manage the often fatal cytokine storm. Pictured, a Covid-19 patient in Los Angeles

WHAT IS THE ‘CYTOKINE STORM’ KILLING COVID-19 PATIENTS?

Devastating lung inflammation triggered by the so-called ‘cytokine storm’ is thought to be what ultimately kills the sickest coronavirus patients.

Cytokines are a group of cells involved in the immune system’s response to injury or infection.

They race to the site of a problem and signal to the body to send more immune cells to mount a defense against a foreign invader.

It’s a crucial part of how the body heals itself – but when it goes haywire it can lead to devastating damage.

The influx of immune cells causes inflammation which, when persistent, an go awry and start killing cells in the very tissues the immune system is trying to protect

When overabundant signalling cytokine cells stay switched ‘on’ for too long inflammation can continue out of control.

This inflammation overwhelms the lungs of coronavirus patients, sending them into respiratory failure an ultimately killing many of them if this inflammation can’t be stemmed.

Tocilizumab was hoped to stop the ‘cytokine storm’ — an overreaction of the immune system causing inflammation — seen in some coronavirus patients.

Cytokines are a proteins in the body that give signals between cells. They play an important role in normal immune responses.

When the body releases too many inflammatory-provoking cytokines in one go, it’s called a cytokine storm.

It is thought to be a major factor behind lung damage, catastrophic organ failure and death in some coronavirus patients.

Tocilizumab reduces levels of IL-6, a cytokine that promotes inflammation in the body found in high levels in patients with autoimmune conditions.

The medication, also sold as RoActemra, is taken by rheumatoid arthritis patients to lower inflammation.

Hopes that tocilizumab would work were boosted by an Italian study in June, which suggested it might slash deaths by 39 per cent.

But the results of the latest trial, from New Jersey’s Robert Wood Johnson University Hospital Somerset, have dealt a crushing blow.

The study was not published in a journal, meaning it has not yet been scrutinised by fellow scientists to uncover flaws in the method.

And it also wasn’t a randomised control trial (RCT), which is considered the gold standard of scientific evidence.

In a RCT, patients are split into two groups at random to receive the experimental drug or a placebo.

Instead, the study — released on medrxiv — analysed the outcomes of 66 patients who had already been given tocilizumab, called a retrospective study.

Researchers matched them with another 66 of a similar age, gender and disease severity who did not receive the drug.

Tocilizumab is used to treat adults with rheumatoid arthritis, as well as certain types of childhood arthritis.

It is typically marketed under the names of RoActemra in Europe and Actemra in the US, produced by the Swiss pharmaceutical firm Roche.

RoActemra was hailed as the first innovation in the field of treating rheumatoid arthritis (RA) for ten years when it was approved by the NHS in 2012.

The prescription medicine works by reducing levels of IL-6 protein in the body, which people with rheumatoid arthritis or another autoimmune conditions have too much of.

If there is too much IL-6, it can cause inflammation and damage. Tocilizumab blocks the effects, and has become a go-to for inflammatory disease treatment.

Doubts have been raised about the safety of tocilizumab, which has a long list of side effects including a cough, headaches or dizziness, high blood pressure, and stomach problems.

Tocilizumab has been shown to increase the risk of infections in patients with rheumatoid arthritis, including pneumonia and upper respiratory tract infections, according to Versus Arthritis.

Trials on patients with RA before approval were not designed to assess long-term efficacy and safety.

The Food and Drug Administration has received reports on 1,128 people who died after taking Actemra, according to a report by Stat News in 2017. It said the FDA declined to comment about Actemra.

Therefore, patients were not randomly assigned to receive the drug from the beginning and there was no placebo arm.

The researchers admitted there is room for selection bias – the patients in the tocilizumab arm may have had worse disease severity, even if the researchers tried to match them with a similar patient.

During the pandemic, doctors have needed to make decisions about which treatment to give depending on the patients.

Generally in this study, patients who had received tocilizumab were given it early on before the progression of respiratory failure.

The other patients received standard ‘supportive care’, which differs broadly depending on the patient, given that doctors do not have a one-size-fits-all approach to treating Covid-19 yet.

They were given the antibiotic azithromycin and antimalarial drug hydroxychloroquine – also being trialled as a potential Covid-19 treatment – on presentation to the hospital, as were those in the tocilizumab group.

Data showed 18 patients died in both groups, suggesting tocilizumab had no benefit. The researchers called the findings ‘unexpected’.

Academics led by pharmacist Andrew Tsai suggested the drug did not work because dozens of cytokines are released — not just IL-6.

There is not enough evidence to conclude that interrupting the signalling of IL-6 alone is enough to prevent the cytokine storm, the team concluded.

They wrote: ‘Contrary to other observational studies that have been reported, we did not find a benefit with tocilizumab treatment.’

One study in March, before the coronavirus had took hold across the world, claimed tocilizumab cured 95 per cent of critically-ill patients.

Chinese medics gave it to 20 patients during the peak of the country’s outbreak, and claim 19 were discharged from hospital within two weeks.

But the study — which led to Beijing approving the drug to treat Covid-19 — was very small and did not compare it against a placebo.

Doctors in China were the first to try tocilizumab against the deadly coronavirus that causes Covid-19 in early February.

Severe or critical Covid-19 patients treated with the drug saw their fever return to normal within a few days, and all other symptoms improved remarkably, Dr Xiaoling Xu and colleagues reported.

Nineteen patients (95 per cent) were discharged after 13 and a half days. The other patient is recovering well, the study said.

CT scans also showed damage to the lungs reduced significantly around the fourth and fifth day of treatment.

The authors concludes: ‘Tocilizumab is an effective treatment in severe patients of Covid-19, which provided a new therapeutic strategy for this fatal infectious disease.’

The researchers did not compare the drug to a placebo or any other drugs in the small study. The paper was published on ChinaXiv, a website which hosts scientific research which has not been peer-reviewed.

Another promising Italian study, which claimed tocilizumab may slash deaths by 39 per cent, was also only a retrospective analysis.

The only RCT of Actemra — which began in March and involved 452 patients across 60 hospitals in the US, Canada and Europe — showed it had no benefit.

The phase III COVACTA trial, launched by biotech company Genetech, compared the drug to a placebo plus standard care.

All of the patients had been hospitalised with severe coronavirus-related pneumonia, a life-threatening complication.

Roche said the COVACTA trial failed to improve the condition of patients or survival rates. Genetech said it was ‘disappointed’.

Around 19 per cent of patients in both groups died after four weeks, according to the results of the study.

However, patients treated with Actemra were ready to be discharged after 20 days compared with 28 days in the placebo group.

Despite the setback, the drug will still be tested by Oxford University researchers in the RECOVERY trial in Britain.

The RECOVERY trial was the one to prove dexamethasone could save up to 35 per cent of Covid-19 patients relying on ventilators – the most dangerously ill – and reduce the odds of death by a fifth for all patients needing oxygen at any point.

Remdesivir — an experimental drug originally designed to treat Ebola — has already been approved in the UK and other nations to treat Covid-19 patients.

Matt Hancock called remdesivir the ‘biggest step forward’ in treating Covid-19 after the drug became the first medicine approved for coronavirus patients in Britain in May.

But the study results for Remdesivir are not as conclusive as dexamethasone.

Gilead Sciences Inc, who manufacturers the drug, found it reduced the risk of death in severely ill coronavirus patients by 62 per cent. But the study was retrospective, and not a RCT.

Can vitamin pills protect you from cancer?

Are the additives in our food making us ill?