The 33-year-old singer, who shares her baby with her husband Alex Fine, appeared in a before-and-after collage demonstrating 30lbs of weight loss.

She posted the picture with a blog that revealed that even the before shot was taken ‘a little over one month postpartum,’ when she had already dropped about 30lbs. 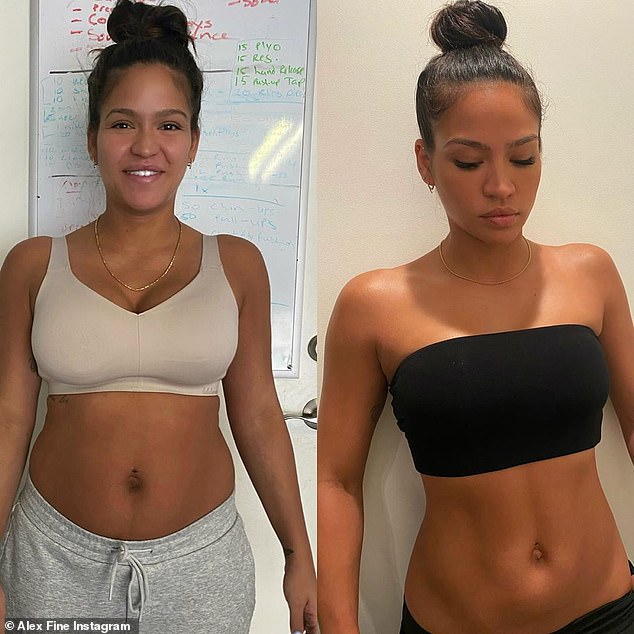 Looking fab: Cassie has shown off her stunning post-baby body eight months after welcoming her firstborn daughter Frankie with her husband Alex Fine

‘I gained a total of 60lbs. Yes! I thoroughly enjoyed my pregnancy lol. I lost 20lbs within the first couple of weeks which I was told was normal and then another 10 gradually over the next 2-3 weeks,’ she explained.

‘I started to workout when I had a goal of 30lbs to go and when my doctor cleared me to. I went pretty hard at first. By mid March I was down another 15 and feeling pretty good. I had a bit of unexplained anxiety, but I was able to work through it and down another 15 meant I only had 15lbs to go to get back to my pre-baby weight.’

However she mysteriously ‘gained the 15 back,’ prompting her to have ‘bloodwork’ and discover ‘I had something called postpartum thyroiditis. Basically my thyroid was hyper for a short period (hence the anxiety and weight loss) and then slowed down causing me to gain weight back.’

She noted: ‘From what my doctor told me it’s not super common. About 5-10% of women experience it within the first year after childbirth.’ 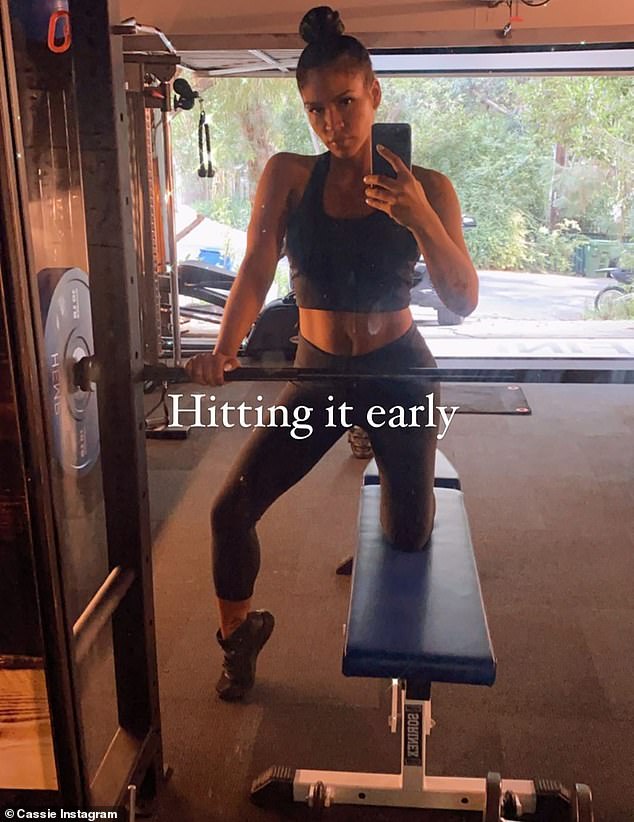 Tireless: She has also written a new blog post describing in detail her health and fitness journey since welcoming her little girl into the world

During the ‘confusing and depressing’ three months that followed she began ‘roughly following an autoimmune diet (AIP) in fear that my thyroiditis would turn into Hashimoto’s Disease (an autoimmune disorder).’

Cassie noted: ‘It wasn’t about my weight anymore, it was about being happy, feeling good and not developing a disorder I’ve never heard of.’

During that time she ‘went up and down with working out’ but when her ‘thyroid finally regulated’ she grew ‘more consistent’ and ‘slowly’ saw the benefit.

‘I know a lot of people think, well she’s married to a personal trainer, it shouldn’t be hard for her or she should be in shape she has no excuse, but I was unhappy with myself. S*** happens, I’m human,’ she shared. 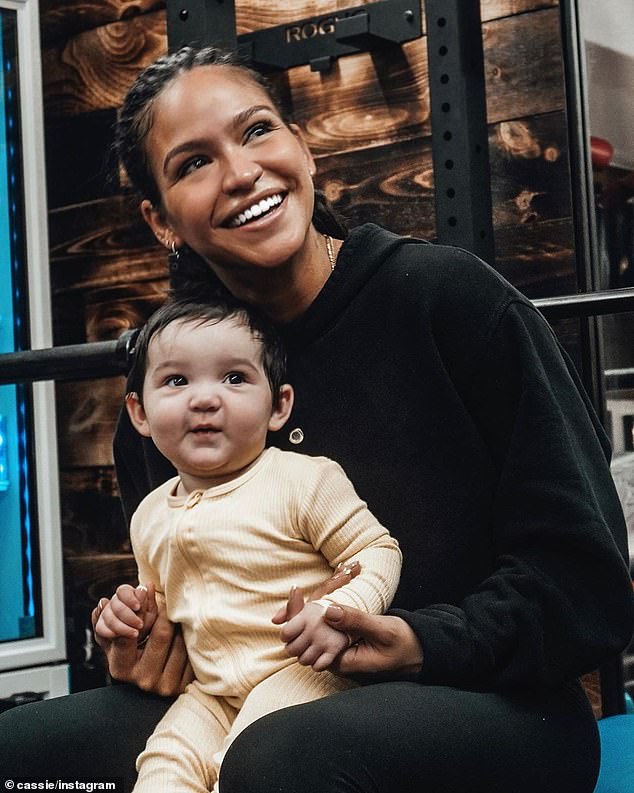 Baby mine: Last week Cassie posted a heartwarming picture of herself cradling Frankie and captioned it with lyrics from the Stevie Wonder song You Are The Sunshine Of My Life

‘Truth be told, Alex spent those months in quarantine with me trying to drag me out of my slump to workout because he wanted me to be happy again, but more often than not I didn’t budge. I finally started working out 2-3 times a week and I’ve gradually moved up to 5-6,’ wrote Cassie.

She brought the couple’s child into the world on December 6 somewhere in Los Angeles County, TMZ reported shortly after.

The 21-inch-long infant weighed 8 lbs 4 oz at birth, according to the gossip website, which specified the delivery took place a a hospital.

Cassie and Alex went public with their engagement last August only a month after she revealed to the world she was having his baby. 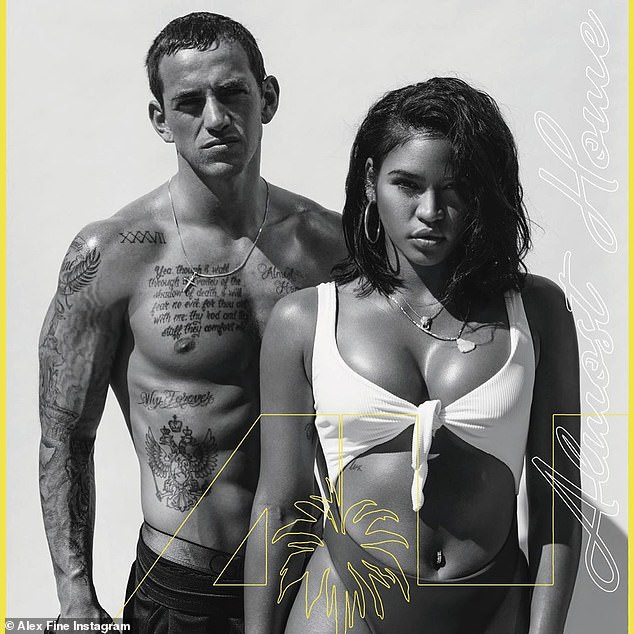 Side by side: Cassie’s husband is  afitness trainer whose celebrity clientele include Kelly Ripa’s husband Mark Consuelos as well as New Zealand actor KJ Apa

This past September the couple were married at a Malibu ceremony and Cassie revealed on Instagram that her dress was by MARNI X MARNI.

She struck up her romance with Alex last year just months after her famous decade-long on-off relationship with Diddy fell apart.

His celebrity clientele include Kelly Ripa’s husband Mark Consuelos as well as New Zealand actor KJ Apa, both of whom star on Riverdale, Vanity Fair reports. 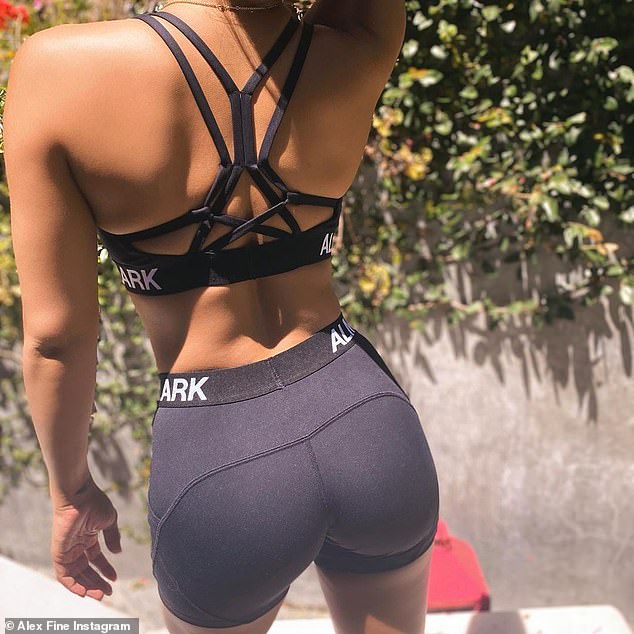 So proud: Alex posted an Instagram album this Friday promoting his wife’s new blog, including both the before and after collage and this snap of her in workout gear

During her pregnancy last autumn Cassie candidly shared with HATCH that ‘I don’t want to lose myself in becoming a mom.’

She explained: ‘Of course, I will do anything for her, but I also want to remain true to myself. I want her to grow up watching me do my thing.’

Said she: ‘I want her to see me making music, building my business, being a mom, a wife, a force, and be inspired by it all. I want to lead by example so she can grow up knowing that she can do anything and be everything her heart desires.’